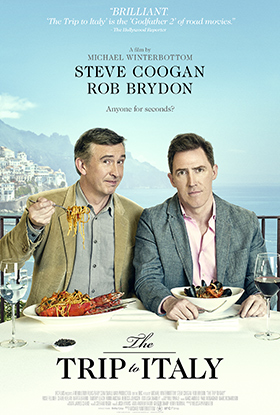 Nomads: Will you be in Portland, Oregon on August 25th? We have 10 pairs of movie passes for an advance screening of “The Trip to Italy” from IFC Films on Monday, August 25th at 7:00 pm at Cinema 21 in NW Portland, the “sequel” to The Trip, starring Steve Coogan + Rob Brydon. I thought the first film was hilarious!

If you’d like to be in the draw to receive one of the passes (admits 2), please send us an email with your full name by noon PST on Sunday, August 24, 2014 to be included on the ‘VIP RSVP’ list.

Synopsis: “Michael Winterbottom’s largely improvised 2010 film, The Trip, took comedians Steve Coogan and Rob Brydon—or semifictionalized versions thereof—on a restaurant tour around northern England. In this witty and incisive follow-up, Winterbottom reunites the pair for a new culinary road trip, retracing the steps of the Romantic poets’ grand tour of Italy and indulging in some sparkling banter and impersonation-offs. Rewhetting our palates from the earlier film, the characters enjoy mouthwatering meals in gorgeous settings from Liguria to Capri while riffing on subjects as varied as Batman’s vocal register, the artistic merits of “Jagged Little Pill,” and, of course, the virtue of sequels.

“Winterbottom trains his camera to capture the idyllic Italian landscape and the gastronomic treasures being prepared and consumed while keeping the film centered on the crackling chemistry between the two leads. The Trip toItaly effortlessly melds the brilliant comic interplay between Coogan and Brydon into quieter moments of self-reflection, letting audiences into their insightful ruminations on the nuances of friendship and the juggling of family and career. The result is a biting portrait of modern-day masculinity.” Watch the official trailer here or below.