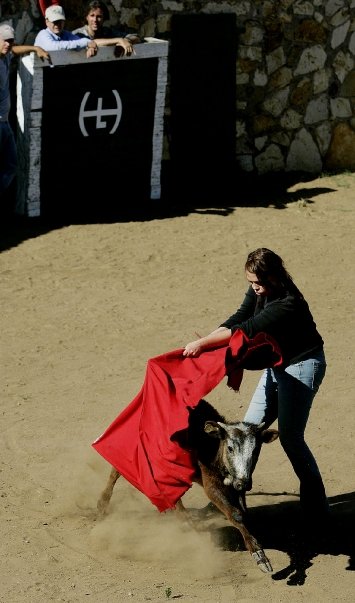 She bursts into the ring at full gallop, kicking up dust as she circles around toward the brightly colored capes being fluttered her way. This first cow is small – 250 pounds at most – with stubby little horns. Her initial cape passes are impeccably performed by Coleman Cooney, owner and founder of the California Academy of Tauromaquia, and Santiago Gonzalez, a former student-turned-instructor and amateur torero, bullfighter, in Mexico.

“Just pretend you’re at the petting zoo,” Gonzalez says to me, as he makes his way back to the burladero, wooden barrier, where I am huddled with several other students. But the comment does nothing to abate my rising adrenaline – I’ve already seen how quick she is.

The next thing I know, I’m cautiously sidling up to her in the center of the ring, knowing full well that she’ll charge toward any sudden movement. Snorting and twitching her ears, we are embroiled in a staring contest and, suddenly, she doesn’t look so small anymore.

I toss the muleta, the red flannel cloth mounted on a wooden rod, toward her, but she doesn’t budge. “Closer!” Cooney yells to me and I edge forward. “Now, really put it in her face!” This time when I cite her, she takes the bait and charges through – just an inch or so from my left hip – and turns on a dime to receive the outstretched cloth again and again. My bullfighting debut is over in a matter of (seemingly slow-motion) minutes. I return to the burladero a bit shaky and triumphant, feeling as if I should have a rose clenched between my teeth.

The ranch owner watches each pass with interest. It is important that these vaquillas, training cows, be of great bravery and charging quality, that they follow the cloth well, as these are the qualities that they pass on to their gargantuan male offspring – the real, razor-horned toros.

In the ring, it’s imperative to keep the heavy, awkward muleta moving in a straight line in front of the vaquillas, so that they learn that the cloth is smooth and predictable; but more importantly, so that you don’t angle it – and them – back toward your body. As with most sports, toreo is harder than it looks: a richly choreographed ballet that requires an incredible amount of upper body strength, concentration, artistry and grace under pressure.

“It is impossible to believe the emotional and spiritual intensity and pure, classic beauty that can be produced by a man, an animal and a piece of scarlet serge draped over a stick,” Ernest Hemingway proclaimed in his classic ode to bullfighting, Death in the Afternoon. Indeed, Cooney tells me he has two sorts of students that sign up to learn toreo: those that embrace the “old school” romanticism of Hemingway and the thrillseekers.

Thrilling it is. But bullfighting – even the non-lethal, bloodless type that’s taught at the Academy – is banned in most states; however, it is not illegal to teach the traditions of the toreo. Cooney, a screenwriter, started the Academy nearly a decade ago – the first of its kind in the U.S. – upon returning from Spain, learning the intricate cape moves of the matador at bull ranches. Since that time, hundreds of students have signed up each year to learn the art.

The Friday night training “salon” at Cooney’s ranch in Alpine, California consisted of myself, Wib Magli and Roger Gonzalez, both real estate investors from Memphis and Los Angeles, respectively. Gonzalez, who likened bullfighting to “creating a living art,” was picking up where he left off with his matador training from 20 years earlier. Magli was a first-timer, but told me he’d wanted to learn more ever since he saw bullfights in Spain: “The fact that the matador, using just a piece of cloth, can take an animal filled with such fury and bend it to his will – even turn it into a sort of dance partner – has always amazed me.”

We were joined at the bull ranch near Tecate, Mexico on Saturday by a myriad of Cooney’s more advanced students: Daniel Vilches (who says he jumped at the chance to practice toreo when he discovered that it “wasn’t an impossibly closed society”); Jerry Roach, former owner of the legendary Cuckoo’s Nest punk nightclub in Costa Mesa; and Aleco Bravo, following in the footsteps of his father, Jaime Bravo, a former actor and esteemed matador in Mexico.

The three vaquillas got progressively bigger and feistier as the day wore on. Gonzalez bravely took on the second, employing her in an elliptical toreo en redondo around himself with high style. She was quickly learning, though, that body contact was much more satisfying than cape contact. After seeing her toss a young, aspiring matador into the air, I politely declined a turn with her, in hopes that I might return home without a new hoof-print tattoo.

Number three had taken the cape well in her first round with Magli, so I ventured into the ring again. The breeze began to unwind my muleta, but I was still able to execute a number of capable passes. “Very torero,” Cooney said to me as I left the ring to a few shouts of “Olé!” and applause from the stands. 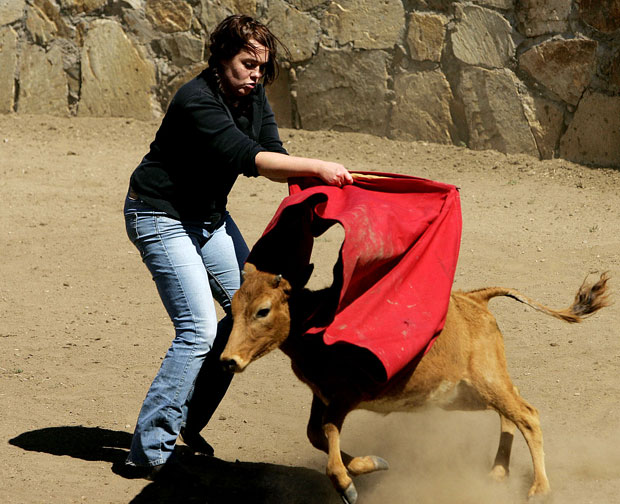