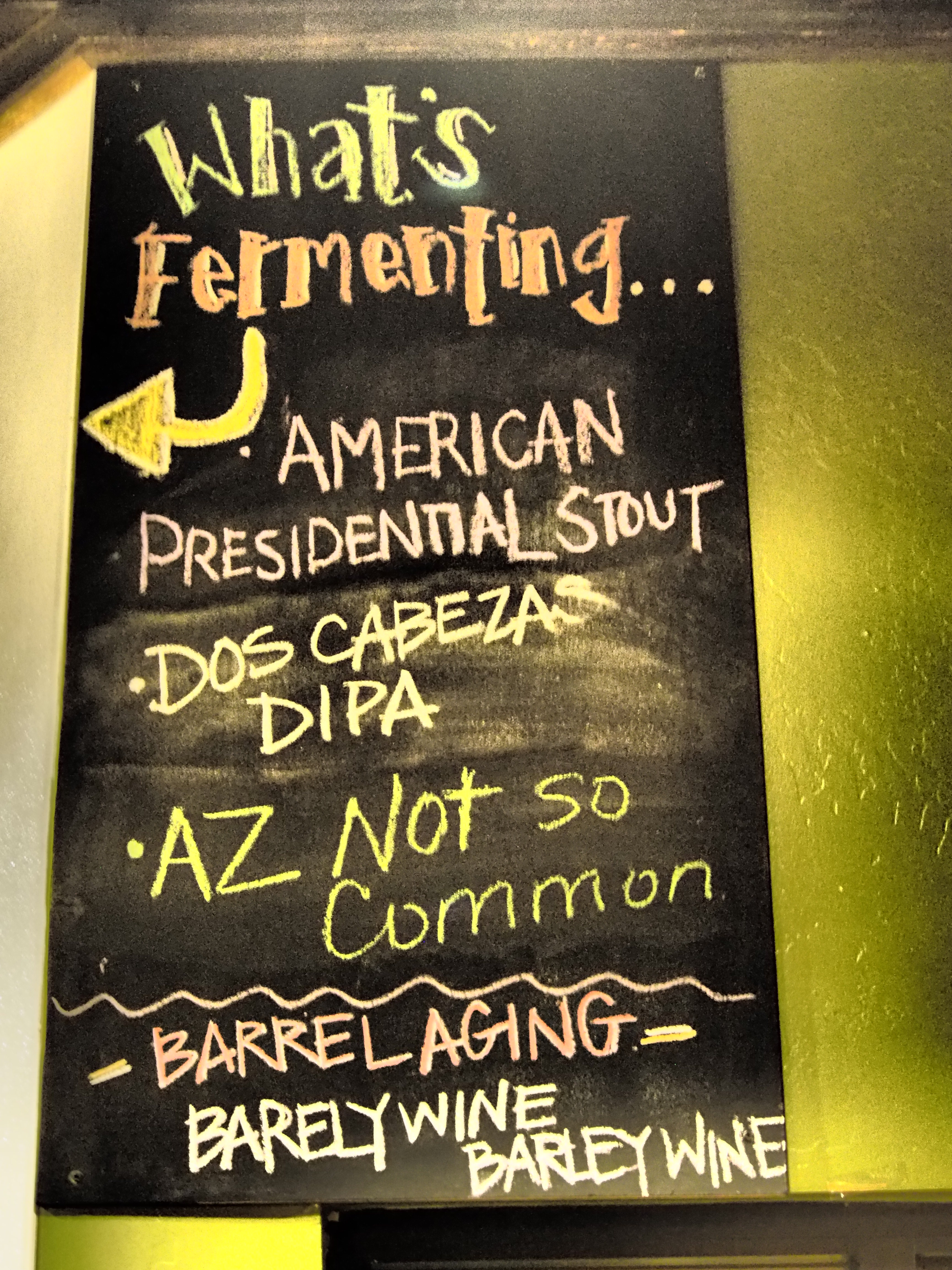 For the last, nearly twenty years, if one would inquire where to procure a great microbrew in the Phoenix area, the stock answer was always: Four Peaks Brewery in Tempe. Led by their near cult-status, four-time GABF medalist Kilt Lifter Scottish-style Ale, the brewery deservedly earned itself a devoted following of craft beer enthusiasts since opening in 1996. In addition to Kilt Lifter, Four Peaks also produces a (delicious) Sunbru Kölsch, Peach Ale, Hop Knot + RAJ IPAs, 8th Street Ale, Hefewizen and Oatmeal Stout. They’ll now be bringing their beers to the traveling masses as well, with the recent installment of a fourth area location in Terminal 4 of Phoenix Sky Harbor International Airport, open “nearly 18 hours a day to better serve the average traveler.”

But the Arizona craft-beer landscape is quickly shifting, sweeping the region faster than a desert sandstorm. Overall, Arizona’s brewing industry boasted $77 million in sales in 2011, says the Arizona Craft Brewers Association. “New microbrewery licenses across Arizona started to rise in 2010 after remaining nearly flat for about a decade. The 23 new craft-brewery licenses issued in the past two years represent about 43 percent of the 54 actively licensed microbreweries in the state.”

Now that there’s suddenly so many choices, where do you start? One of the easiest ways to get acquainted with the top new craft brewers on the scene is to take a brewery tour. One of the area’s best is Arizona Brewery Tours, with their HOP-on tours of < 15 people, you’ll visit three choice breweries in just under five hours, with microbrew tastings at every stop, a meal and behind-the-scenes tours (when possible) – all with a designated driver and guide.

My Arizona Brewery Tour concentrated on new craft breweries in the up-and-coming Mesa/Chandler/Gilbert areas in Phoenix’s East Valley. Our “Chief Flight Officer” for the afternoon was John “Hoppymoto” Alvarado, whose knowledge and enthusiasm for quality Arizona craft beer is evident during his informative tours – and in the way he’s obviously well-liked by the brewers and staff themselves. Highly recommended. 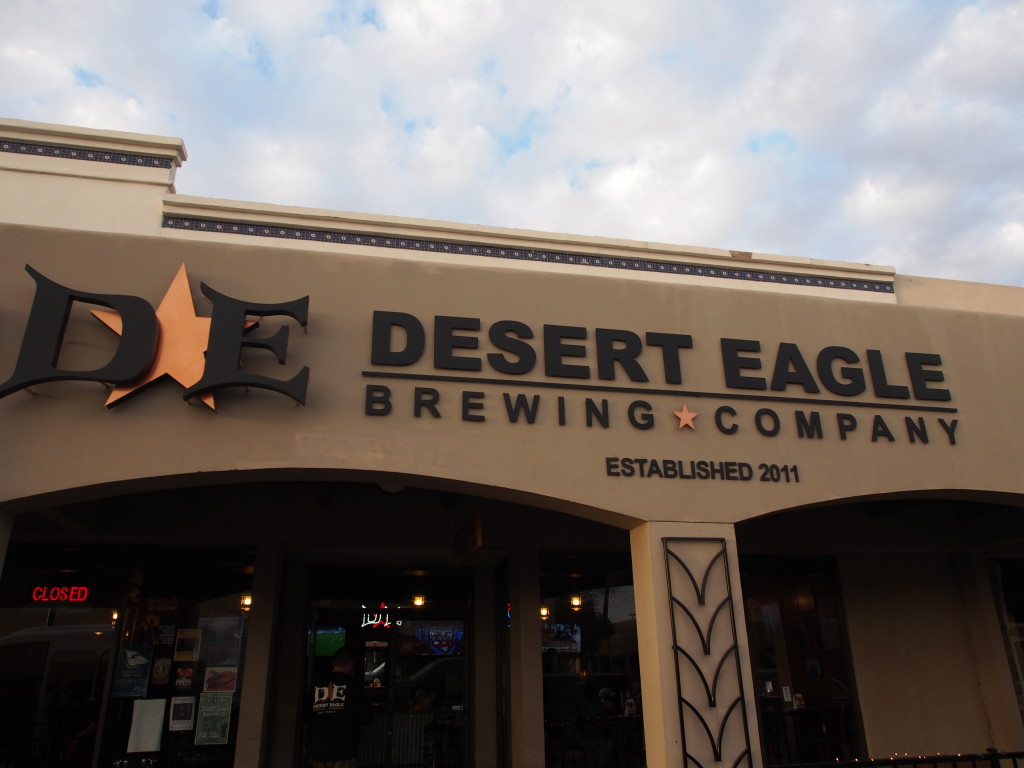 Desert Eagle Brewing Company, Mesa: We began the afternoon at Desert Eagle, Mesa’s original microbrewery, which opened in late 2012. The brainchild of brewmaster and co-owner Joe Campbell (along with partner Jeff Bryant), Desert Eagle was founded not only on Campbell’s passion for home brewing, but his German heritage and vast knowledge of quality craft beers. The Desert Eagle taproom itself is spacious; its centerpiece an immense 44-foot wooden bar, curved to “facilitate conversation” amongst patrons. Although no food is currently served on-premises (a fact they hope to change soon), meals can be ordered for delivery from nearby downtown restaurants. Live music happens on weekends in the taproom.

Desert Eagle’s beers are whole-hop brewed to bring forth the more delicate bitters within. For 2014, they’ve forecasted brewing 2,000 barrels and tripling the output by the following year. For our “Regular Flight” tasting ($8), we sampled four of Desert Eagle’s choices and one of our own: Main Street Blonde Ale (4.5%), Golden Eagle Wheat (5.4%), Dunkel Weizen (5.2%), Red Mountain Ale (6.0%) and my choice – the Buzz Bomb IPA (7.7%). To their credit, I liked them all, but was especially enamored with the hoppy Buzz Bomb IPA, the Amber-like Red Mountain Ale and the crisp, light Dunkel Weizen. Twelve to 13 beers are featured on tap daily and patrons can take home their favorites in half-gallon growlers. 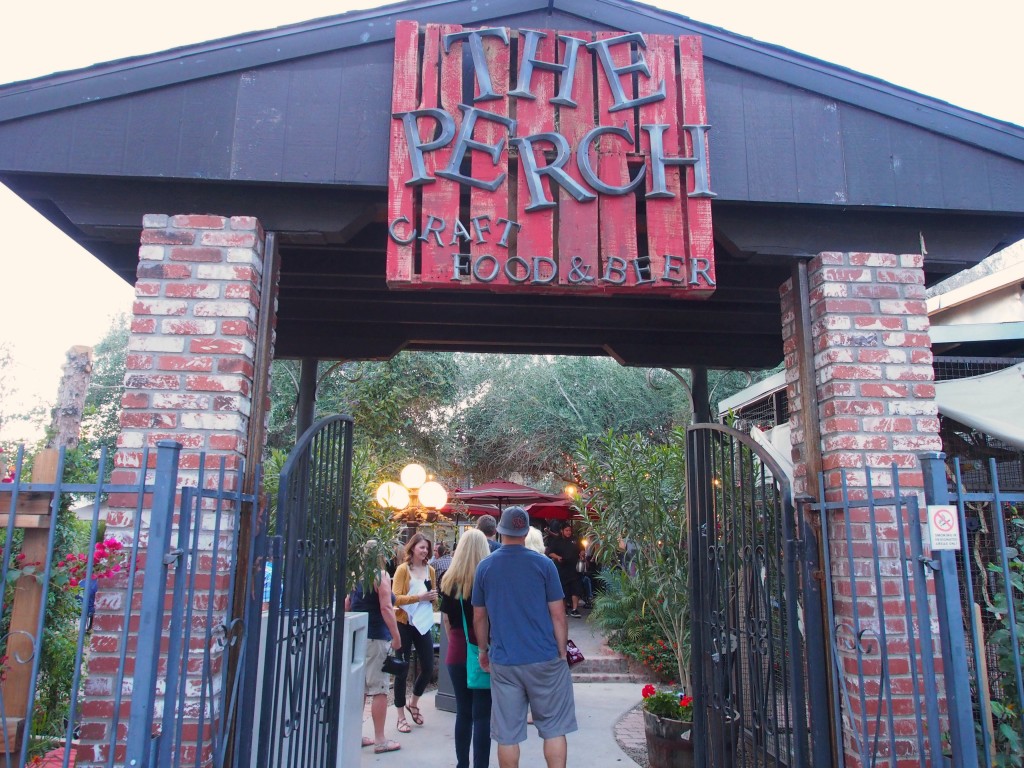 The Perch Pub & Brewery, Chandler: They’d only been open for a few short weeks (since Valentine’s Day) when we visited, but you wouldn’t know it from the throngs of people occupying every table on their spacious, multi-level patio. The Perch’s namesake are its 61 rescue birds, from Amazon parrots to cockatiels, that are housed in several large outdoor enclosures around the patio, adding a tropical ambience to the tree-and-light-filled patio. We’re told the pub’s interior was originally a spa, with the new brewery equipment to be housed in the former wood-lined treatment huts, which may also account for the space’s underlying tranquil vibe, encouraging you to relax and pamper yourself with the delicious food and beverages at hand.

And we did just that, sampling housemade hummus plates and fresh veggie pizzas from the menu, while tasting other local craft-brew favorites on tap, like SanTan Brewing Company’s Sex Panther 2013 seasonal Double Chocolate Porter (6.9%), “brewed with Colonial Rosewood Cocoa and Chocolate Malt with hints of truffle and molasses,” as well as Huss Brewing’s That’ll Do IPA, an India-style brew that wasn’t overly hoppy, with notes of pine and citrus and a clean, smooth finish. We were tasting other area craft beers because The Perch hasn’t begun their brewery operations — yet.

Brewmaster Andrew Bauman tells us that The Perch will begin producing their own triple-hopped and unfiltered microbrews in April, using a 40,000-watt electric brewing system. First on tap will be a Rosemary Double IPA, Honey Pear Golden Ale, Grapefruit Ale and Grilled Lemon Cream Ale.

Beer Sommelier-Chef George Jones is likewise planning a variety of craft beer-inspired menu pairings, such as pizzas with a Guinness-stout crust, IPA Honey Mustard hummus, beer-braised green chile pork, beer-infused burgers and sausages, as well as various housemade seasonal jams and marinades (think: grapefruit-peach-poblano). Delicious. I already like the patio space immensely; I can’t wait to return, once their creative juices (and inventive microbrews and menu items) really get flowing.

Arizona Wilderness Brewing Company, Gilbert: Launched in September 2013, Gilbert’s first brewery has quickly amassed a legion of outdoorsy, beer-loving fans. But what’s truly wild? They were just named the “Best New Brewery in the World” by RateBeer.com a mere four months after opening, (following a successful Kickstarter campaign for more than $43,000 in startup funds), which has garnered the brewery instant local and national attention.

“The Beards,” or as Owner/Brewers Jonathan Buford, Patrick Ware (formerly of SanTan), and Brett Dettler are affectionately referred to by patrons—for their collective penchant for facial hair as well as a shared passion for fine craft beers—have big plans for the brewery. Buford told us that they will be growing their own hops within five years and developing four unique yeast strains for their future line of all-Arizona beers.

While at Wilderness, I sampled their mega-hopped Dos Cabezas IPA IPA (8.5%); the Paiute Pale Ale (6.5%) reminiscent of a fine German pilser malt with orange and pine undertones; the sour wheat Bear Wallow Berliner Weisse Grapefruit ale (3.2%) that fans of Hefeweizen and citrus-y ciders will love; and the smooth Amber-style Red Rock Secret red ale (6.0%). Buford also allowed us a sneak-peek barrel tasting of their ruby red “Barely Wine Barleywine” in-progress, which was light, refreshing and perfect for patio sipping.

Beyond the outdoor-themed taproom and all-day happy hour on Sundays, I really liked the fact that each beer on tap was paired with a complementary menu item, such as the Dos Cabezas Double IPA with a tasty Jalapeno meatloaf slider. Overall, the food’s fresh and delicious and Arizona Wilderness Brewing’s creative plans for new craft beers and other barrel-aged libations make them one of the top breweries to watch in the area – if not the world! As Buford stated, “Our motto is, ‘Arizona is a land of vast diversity and great contrast.’ We wish to represent that in our beer.”

But we weren’t done tasting yet! Unbeknownst to us, we had a few more brewmasters on board: Matt Trethewey and Greg Sorrels, Owner/Brewers of the forthcoming brewpub, The Beer Research Institute. Pending proper licensing approvals, BRI is slated to open this June in Mesa at 1641 South Stapley, at the intersection of U.S. 60.

They generously allowed us to taste their brand-new IPA and Vanilla Porter craftbrews, the latter of which I immediately swooned over, with its vanilla-spice nose and nutty finish. The guys were kind enough to provide me with some take-home bottles of both, which were worthy of the precious luggage space that they inhabited!

Trethewey shared their hopes for the BRI brewery with me: “Greg and I have been brewing together for 8 years. We both love craft beer and what you can do with it. We want the BRI to be a gathering place – a place with a cool vibe that people want to come to and hang out for a while. I think with our past experience and our passion for what we’re doing, we should be able to make that happen. Arizona is our home and Mesa is in need of more high-quality craft beer. There are almost 500,000 residents in Mesa, but and only one brewery, which is a production brewery. The BRI will be Mesa’s first brewpub and we couldn’t be more proud. The industry as a whole is booming and that’s reflected in Arizona’s craft beer growth. Timing is everything!”

Judging from the quality of brews I tasted that day, I’d say that the timing is perfect for these four new breweries to help usher in a great new craft beer scene in Arizona. I wish them all tremendous success and can’t wait to taste their future microbrew creations—purely for research, of course.

Many thanks to the Visit Mesa CVB for their assistance in setting up such a great brewery tour. Visit them online for more ideas as to where to drink, dine and stay in the area during your next visit. 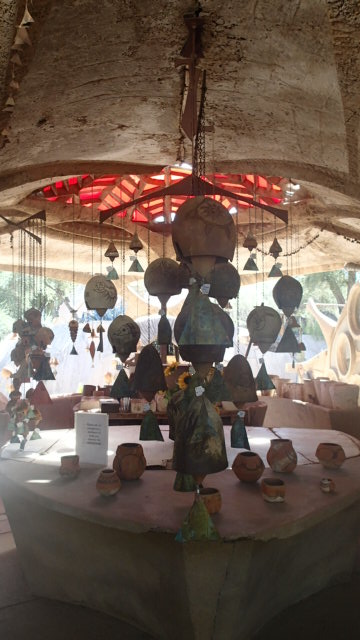 No better view of the #Seattle waterfront than by

The beauty of bonsai. @pacificbonsaimuseum has 100

Driftwood + sunset from the Salish Sea.