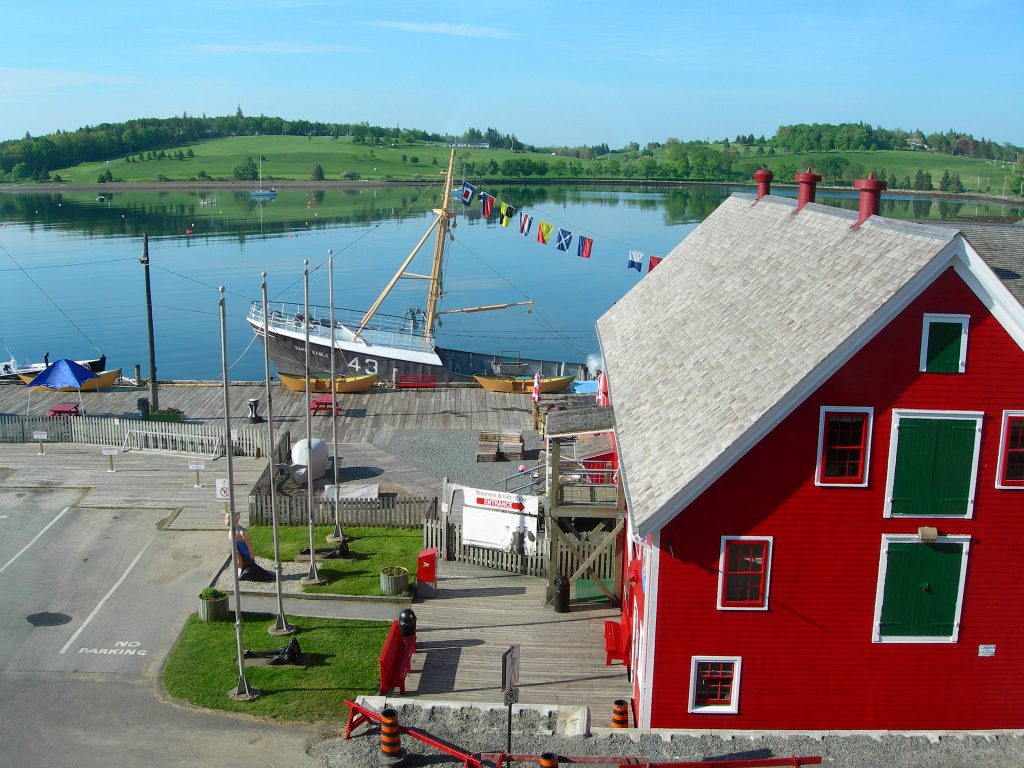 Beyond saving yourself from gridlock traffic jams on I-95 and coastal Highway 1, here’s 5 more reasons to trade New England for Nova Scotia this year: 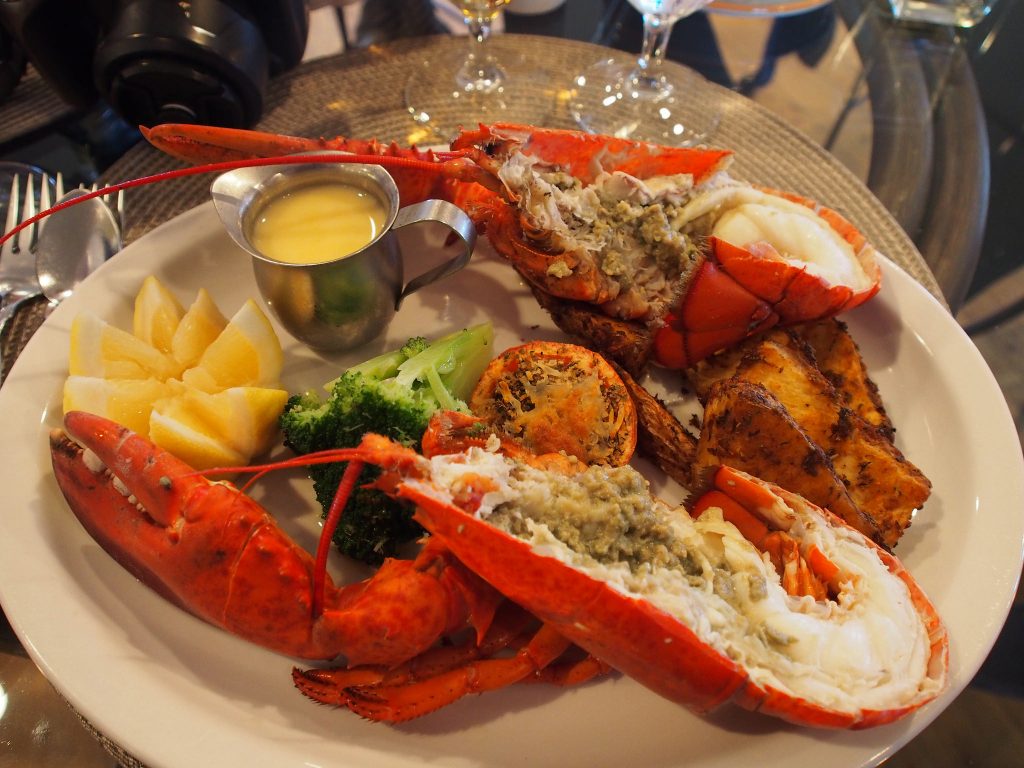 Shediac, on New Brunswick’s eastern seashore, as well as Rockland and Vinalhaven, Maine may all claim the titles to Lobster Capital of the World, but Nova Scotia’s Shelburne County, near Yarmouth and the Acadian Shores, has been Canada’s Lobster Capital since the mid-1800s.

Enjoy a bowl of seafood chowder with maple-smoked salmon, plump pan-seared scallops and inventive lobster dishes at Charlotte Lane Cafe + Gift Shop; try a lobster burger with Haddock (the Atlantic Maritime’s delicious, meaty whitefish equivalent to Halibut) & Chips at local favorite Mr. Fish; or pick your own live lobster to be enjoyed around a campfire with a beautiful seaviews of the Bay of Fundy at Stanley Lobster.

As its prime maritime catch, fresh lobster can be found throughout Nova Scotia, from picking your own at a local lobster pound or a scenic lobster supper cruise to a catch-of-the-day lobster boil on the beach. Still craving more crustacean? You can design an entire road trip around lobster with a variety of culinary experiences in which to enjoy the succulent dish, prepared any number of ways. 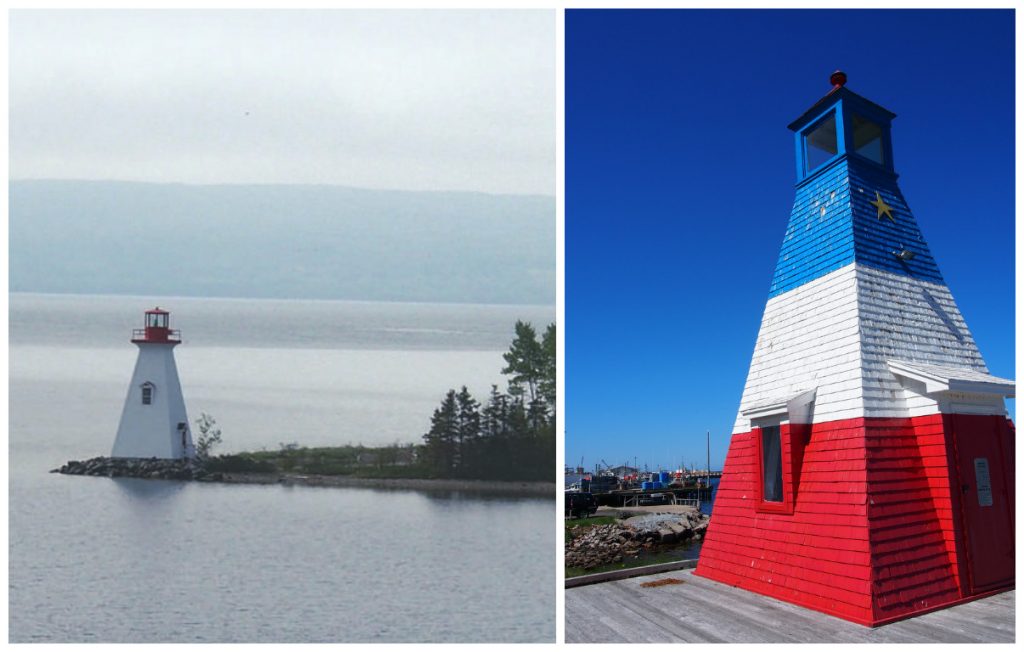 An iconic emblem of Nova Scotia’s storied maritime history, the 20 lighthouses along the rugged Southern coast comprise The Lighthouse Trail. A complete list of lighthouses, including those that are open to the public, with maps and suggested driving route can be found on The Nova Scotia Lighthouse Preservation Society. Short on time? Fourteen of the 20 lighthouses can be found in Shelburne County alone. A great way to work off your lobster feast! 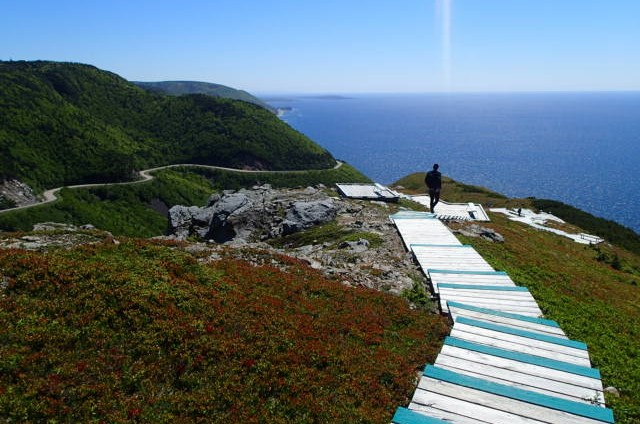 Named the top island in North America by Travel + Leisure, Cape Breton consistently lands in ‘best of’ travel lists for its “breathtaking beauty in a rustic setting: mountains, sea-faring villages and ocean cliffs,” as well as high friendliness rankings and a plethora of opportunities for outdoor adventure and culinary delights.

Undoubtedly, the best way to take in all that Cape Breton has to offer is a 185-mile loop around the island on the scenic Cabot Trail, which also includes the iconic Cape Breton Highlands National Park. There are 26 hiking trails within the Cape Breton Highlands, but the crown jewel is the 4.7-mile Skyline Trail with panoramic vista and ocean views of the Gulf of St. Lawrence, suitable for most fitness levels. The 10-day Hike the HIghlands Festival in September features guided hikes, evening activities, presentations, a photo contest and more. 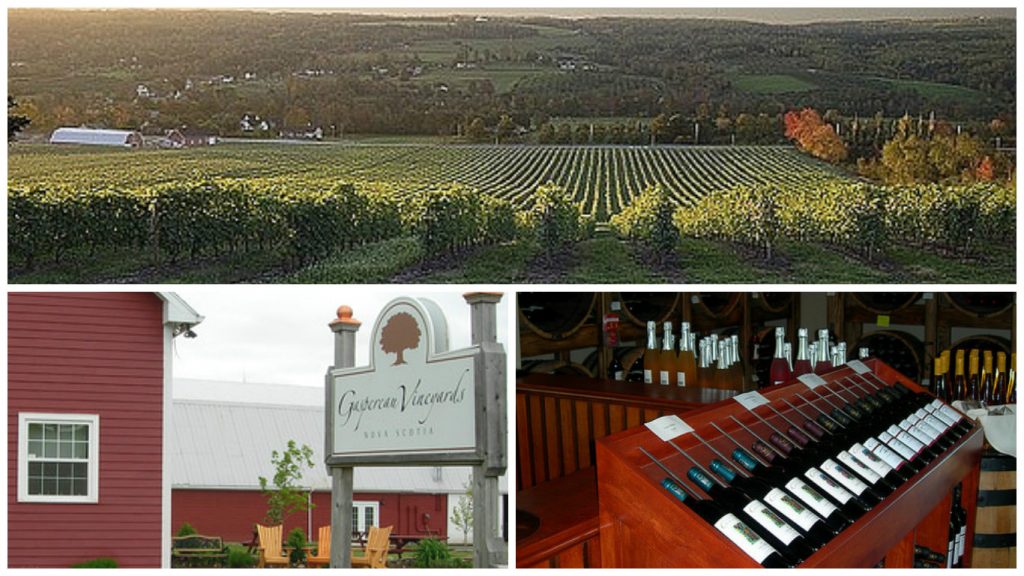 Nova Scotia has its own celebrated terroir and wine country; in fact, Annapolis Valley was one of the first places in North America to cultivate wine grapes in the 1600s. Their premier appellation, Tidal Bay, produces crisp French-style white varietals, like L’Acadie Blanc and lush, full-bodied reds, such as Marechal Foch. Most of the 16 wineries are centered around the town of Wolfville, many with gorgeous views of the Bay of Fundy. Catch a ride on the hop-on/hop-off Wolfville Magic Winery Bus departing hourly from downtown Wolfville until October 16, packages start at $25. 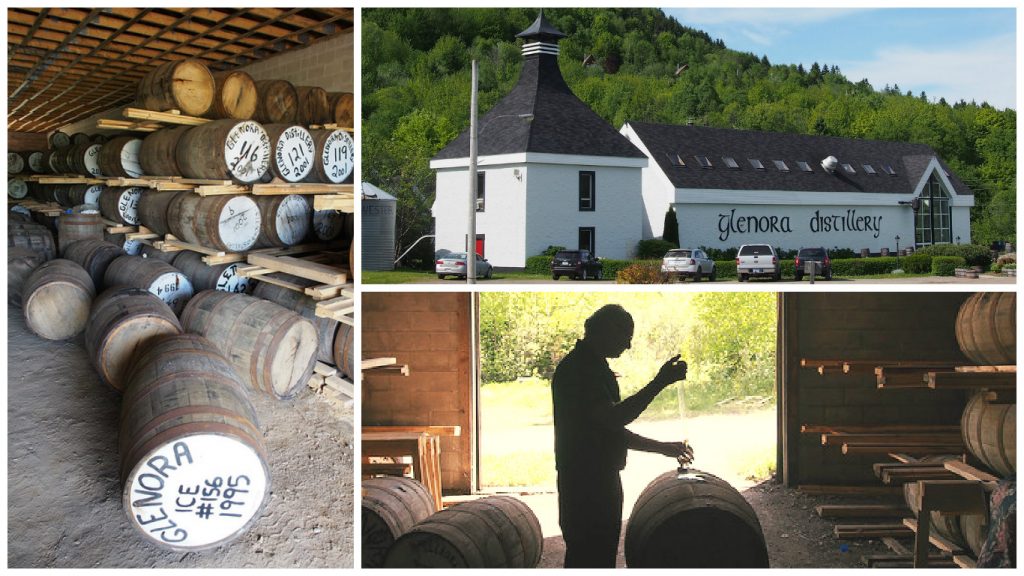 For those that prefer whiskey to wine, Glenora Distillery is North America’s only single-malt whiskey distiller, nestled in a scenic glen in Cape Breton, reminiscent of the Scottish Highlands. With a nod to their Scottish ancestry, Glenora uses authentic Scottish Copper Pot Stills and Mash Tun for production with water sourced onsite from MacLellan’s Brook (“the purest and cleanest source of water in Cape Breton”), but ages their smooth, rich Glen Breton whiskey in ice wine barrels. Tours (with tastings) are given daily though October, on the hour. The distillery also has an onsite restaurant, pub and inn with nine rooms and six well-appointed log chalets, for those wishing to linger. 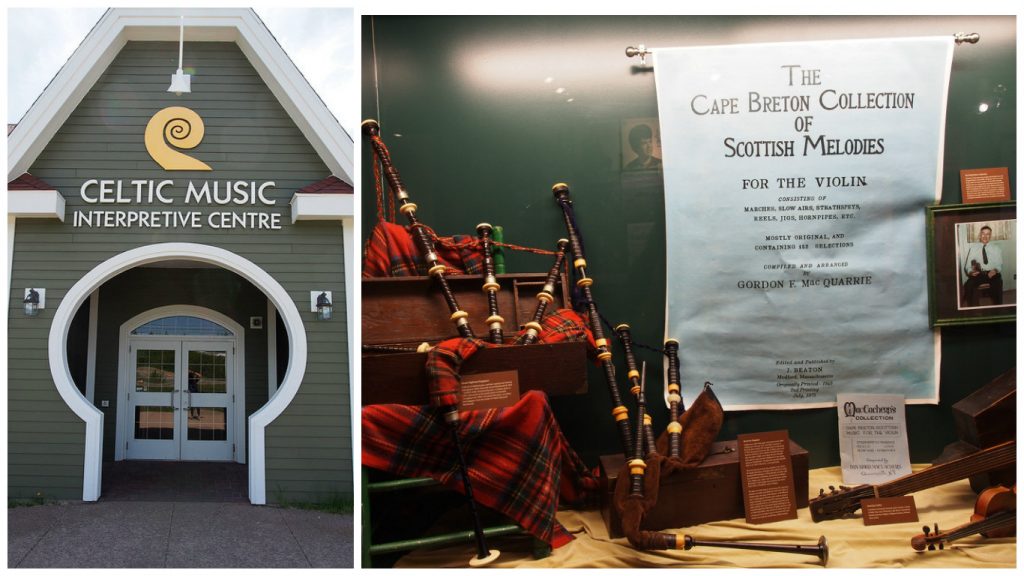 Another of the Cape Breton’s best and historical offerings is its music, with Celtic-style fiddling at traditional ceilidh (pronounced: kay-lee) musical gatherings held daily in summertime in pubs, public halls and private kitchens island-wide. Or, take a trip on the Ceilidh Trail on Cape Breton’s west coast: highlights include the Celtic Music Interpretive Centre in Judique to learn more about the music’s history, try your hand at fiddling, or to experience a daily lunchtime ceilidh, as well as local favorite, The Red Shoe Pub in Mabou, owned by the internationally renowned Rankin family, for home-cooking and fantastic live music, seven days a week. 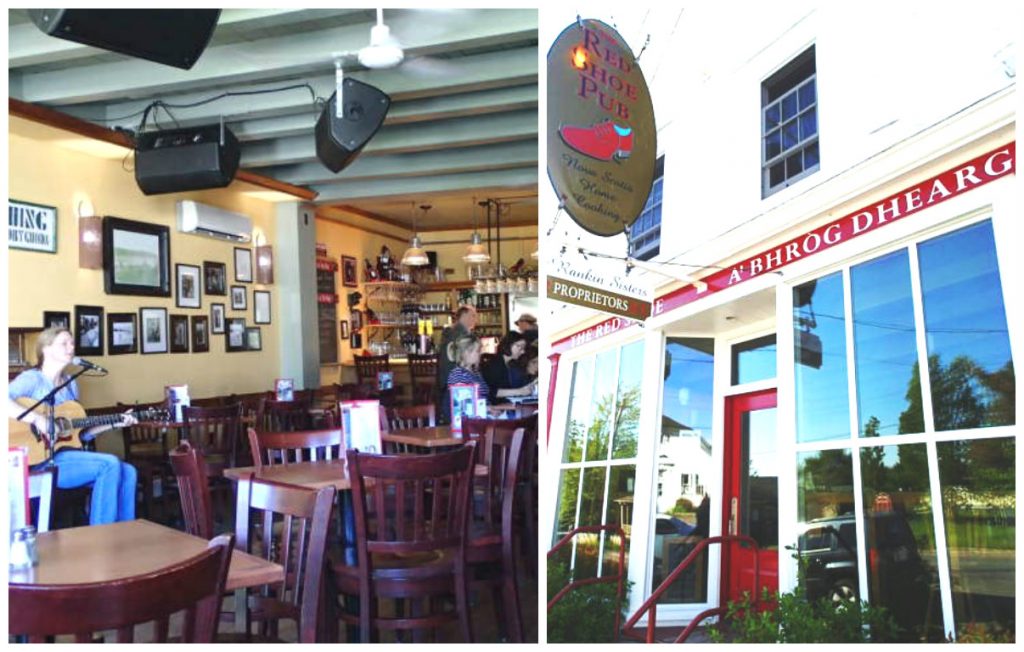 Time your visit right and you can experience much of the above simultaneously, as with the Canadian Deep Roots Festival held in Wolfville wine country during the last weekend of September, or the Celtic Colours International Festival, which takes over the island in mid-October. 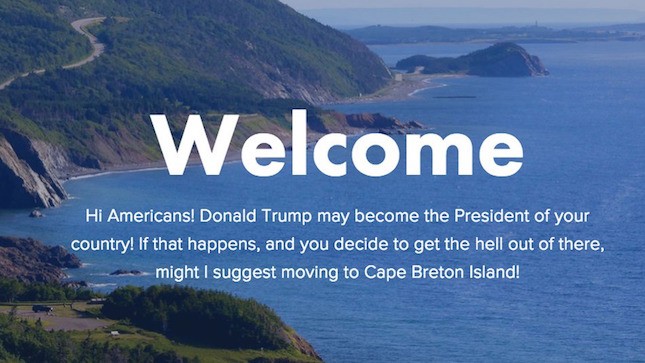 Are you one of the politically disgruntled Americans that’s threatened to move to Canada if this year’s presidential election doesn’t go your way? Now you can!

No matter your political affiliation, Nova Scotia’s Cape Breton has launched a campaign to welcome fleeing Americans to its shores with open arms and dual citizenship. Perks include: the most affordable housing market in North America, friendly people, fresh seafood, free healthcare and incredible scenic coastal beauty. What more could you ask for? (To meet your Canadian soulmate who loves to travel?)

For more information on Nova Scotia, as well as annual events, plus lodging and other great places to eat, shop and explore, visit the official visitor’s site at NovaScotia.com.

All photos: © Tiffany Owens | ModernDayNomads.com, (except the last photo, courtesy of CBifTrumpWins.com). May not be reproduced without permission.

A portion of this travel was sponsored, in part, by Tourism Nova Scotia; however, all views are my own.