From the moment Frank Lloyd Wright first laid eyes on the desert, he was drawn to the “vast battleground of titanic forces called Arizona.” In 1937, deciding that there was no better place to spend the winters, he built Taliesin West, an 800-acre retreat for his family and apprentices. Wright purposely chose the location well outside of Phoenix city limits, so that no building codes could be enforced on his ever-changing project. “Here, he didn’t have to play by anyone else’s rules,” notes Stan Jones, Taliesin West’s Assistant Public Access Manager. “He wanted to experiment – the place and craftsmanship were always evolving.”

True to Wright’s “organic architecture” principles, Taliesin West was not only in the desert, but of it. “Our new desert camp belonged to the Arizona desert as though it had stood there during creation,” Wright said. The immense complex included apprentice living quarters, cafeteria, two theaters, offices and a drafting studio. It also included his family’s private living quarters, which were opened to the public and put on tour for the first time in November 2004 to help generate funds for their continued restoration. Millions of visitors have toured Taliesin West in the near half-century since Wright’s death, but few had seen the famed architect’s living quarters before.

A living laboratory
The living quarters were added to Taliesin West in 1940. It’s obvious that comfort and expediency were paramount to Wright in their design: fireplaces inside and out provided warmth on chilly nights; canvas panels over window frames could be rolled up or down to keep out sun and weather; recessed lighting of Wright’s own design gave a soft illumination; and colorful upholstery, thick rugs, Southwest pots, kachinas and Eastern art and artifacts added luxuriousness to the living spaces.

The first private area to be restored was Mrs. Wright’s Day Room, originally called the “Swan Cove,” due to its prominent Japanese print with swans (a duplicate of the original). Here, Mrs. Wright would read, nap or answer correspondence.

In Wright’s own bedroom, a small window was installed so that Bruce Brooks Pfeiffer (his personal attendant and former apprentice, now the Director of The Frank Lloyd Wright Archives) could see if he was awake before coming in each morning. There are two beds on either side of a partition: one for sleeping at night; the other, a day bed for napping or reading. Wright’s bookshelves hold second- and third-edition copies of the original titles he owned and read in his lifetime. (As a side note, I found it interesting that his personal library included Ayn Rand’s Atlas Shrugged, but not The Fountainhead. Many have speculated through the years that Howard Roark, the upstart architect character in Fountainhead, was loosely based on Wright. Rand, a Wright client herself, always denied this claim).

Another notable feature in the Wright’s living quarters is the obvious lack of closet space. “The more storage space you have,” Wright claimed, “the more likely you are to accumulate things you don’t really need.”

The facilities architect for the living quarters’ ongoing restoration is Arnold Roy, a former apprentice that studied and lived with the Wrights at Taliesin West. Wright’s furniture has been painstakingly recreated from Roy’s memory and old photographs from the archive – none of the originals have lasted. The only pieces that did survive from the ‘50s were patio furniture, purchased from a patio store in Phoenix, sandblasted to bring back the original color.

The second phase of the Taliesin West restoration reinstated Mrs. Wright’s bedroom to the way it was in the mid-‘50s. A red, circular “Moon Gate” leads to a little private patio off of Mrs. Wright’s bedroom. After his death, Mrs. Wright had a swimming pool built, which had to be taken out to restore the garden and its surrounding stone walls back to their original state.

Wright first ordered the stone garden walls to be built up in an attempt to block out newly installed power lines below and keep his beloved view of the surrounding mountains and sky intact. But it wasn’t enough. Wright was still so perturbed by the intrusion of the power lines that he wrote to President Truman requesting that they be placed underground. When Truman refused, saying it would create a precedent, Wright retorted, “I have been creating precedents all my life.”

Had it been built, Wright would have also had a clear view of his Arizona Capitol Complex or “Oasis-Pro Bono Publico” design from his bedroom. In true Wright style, he selected a location among the Papago Park Buttes, whose spectacular land formation would have served as a natural compliment to the unique design. Instead, the state chose to erect conventional box-like buildings in front of the original 1900 capitol building on Washington Street to house the legislature, as well as a boxy high-rise behind the capitol building for the governor’s and executive offices.

Years after the project was passed over, John F. Kennedy’s Secretary of Interior Stewart Udahl was asked why his home state of Arizona had one of the least attractive capitols in the country. To this he answered: “Because we missed the boat and muffed the ball when we rejected the Oasis Project designed by Frank Lloyd Wright.”

The only part of the Arizona Capitol/Oasis project ever realized was its spire, erected at the intersection of Frank Lloyd Wright Boulevard and Scottsdale Road in 2004. The spire installation put Wright firmly into three centuries of architectural designs being built, the only architect in history to enjoy that accomplishment.

The great Biltmore debate
Another notable precedent was created when Wright was first invited to the desert in the 1920s as a design consultant on the Arizona Biltmore Resort project by former student and project architect Albert Chase McArthur. While most design experts agree that many characteristics of the resort’s designs can be directly attributed to Wright, the debate continues to this day over whether the Biltmore was a collaboration between the two men, an “official” Wright project, or if the celebrated architect really was a mere consultant.

Regardless of where the real credit lies, the timeless Arizona Biltmore hosts an impressive amount of architectural innovation, from its Wright-like façade to its expansive interiors. But perhaps the building’s most distinctive feature is its decorative “Biltmore Blocks,” each bearing an Art Deco-ish, geometric pattern inspired by the (non-indigenous) palm tree bark.

Wright had agreed to assist with the design of these concrete blocks and teach the locals how to make them. He was purportedly paid $1,000 per month for consulting fees and an additional $7,000 to cover the rights to the unique concrete-block method. Although the blocks’ actual design is credited to sculptor Emry Kopta, they are also very much Wright-inspired. McArthur also followed Wright’s organic design philosophy: using nearby sand and water from the Biltmore property for the blocks and including many open spaces.

Another impressive architectural highlight is the gilded Aztec Room. With a shape reminiscent of a patio in a Wright-designed home, the Aztec Room’s ceiling dome is supported by 40-ton copper filigree beams with immense ceilings covered in gold leaf – the amount used in its construction is second only to the Taj Mahal.

The overall effect, as the Arizona Republic noted after the hotel’s opening on February 23, 1929, “removes the curse of barrenness clinging to all previous attempts at modern architecture.” More than 600 celebrants attended the lavish opening festivities, as a plane circled overhead and dropped a large wooden key from the skies.

Since that time, the Biltmore has graciously hosted a long list of celebrities, including Clark Gable, Marilyn Monroe (who favored swims in the Catalina Pool), Frank Sinatra, Tony Bennett, Bruce Springsteen, Nicole Kidman, Julia Roberts, and every U.S. president since Herbert Hoover. Ronald Reagan was particularly enamored with the Biltmore; he and Nancy spent their honeymoon there in 1952. 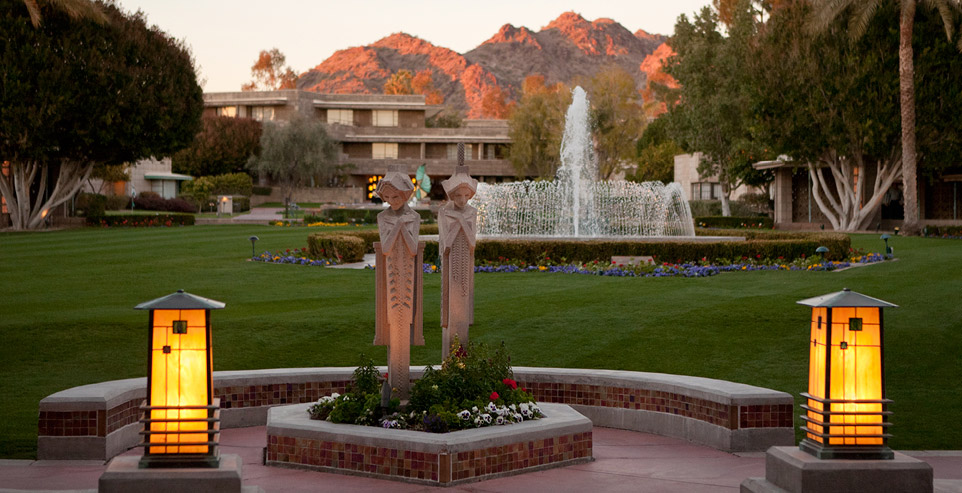 Only two of Wright’s original designs remain on location at the Biltmore: eight sprite statues, designed by Wright in 1914 for an exhibit at Chicago’s Midway Gardens; and “Saguaro Forms and Cactus Flowers,” a stained-glass Wright mural. A gift from his widow (and strangely indicative of Wright’s controversial Biltmore legacy), the mural was accidentally hung upside down and remains that way today, as it was too fragile to turn.

However, two of the Biltmore’s main attractions are named for Wright: Wright’s Restaurant and the Frank Lloyd Wright Ballroom, which debuted in June 2003 and features 24,576 square feet of ballroom space with an additional 10,798 square feet of pre-function space. With a 22-foot ceiling featuring stained wood and copper inlays, this ballroom is adorned with custom chandeliers and wall sconces as well as custom fabrics from the Frank Lloyd Wright interior design collection. (It should be noted that the Biltmore has also given McArthur his due with the 15,000-square-foot Pavilion, renamed the McArthur Ballroom.)

To this day, McArthur’s relatives still contend that Wright was asked to help with the Biltmore’s design when he was down on his luck (and at the time, he was), but that was all. “I have always given Albert’s name as architect…and always will,” Wright wrote to McArthur’s widow nearly 25 years after the fact. “But I know better and so should you.” 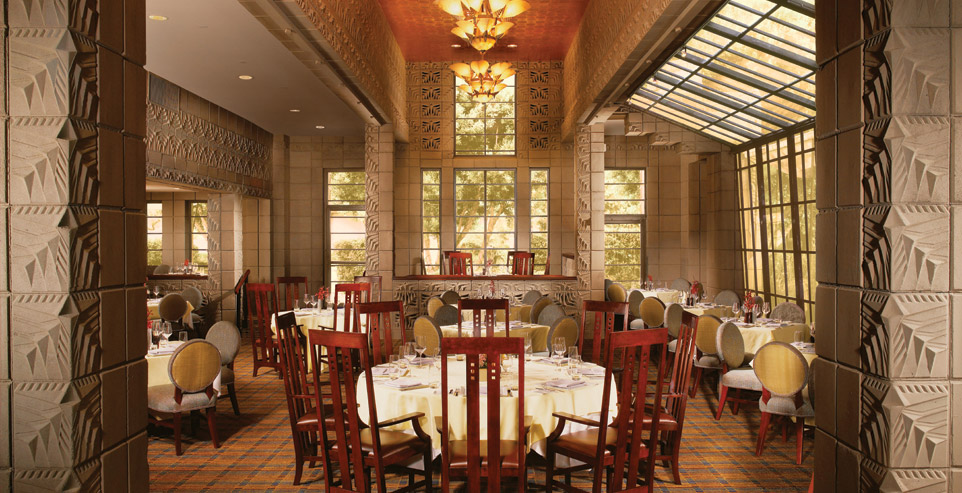 While a new remodel is underway in Fall 2014 at the Biltmore, Wright’s undeniable influence still remains at the heart of the redesign: “A particularly memorable feature in the guest rooms will be the mist-colored wall-covering embossed with a metallic Frank Lloyd Wright design, which echoes the historic pattern on the Biltmore Blocks used to construct the entire resort. The innovative inspiration for the new carpet in the corridors will be Frank Lloyd Wright drawings of the hotel gardens blended with geometric shapes, creating an avant-garde historic interpretation. This contemporary merging of Wright designs and geometric patterns will also be the theme for the Frank Lloyd Wright and McArthur ballrooms, which will be refreshed with new carpet, wall coverings, artwork and furniture. Thanks to conscientious owners who have been committed to preserving its architectural integrity, the resort is, in many ways, even more ‘Wrightian’ than when it was built.”

“Whether people are fully conscious of this or not, they actually derive countenance and sustenance from the ‘atmosphere’ of things they live in and with.”
— Frank Lloyd Wright